This fall I've made much of the requisite apple dishes. You know the drill- apple pie, apple crisp, baked apples. Yummy, but after awhile-can I say it? Boring. I was going through my binder of clipped-I have to try these someday-recipes and found a new one. I wouldn't have to pass up the gleaming piles of the fruit at the farmer's market again.

The gem that caught my eye? Apple and sausage pie printed in the magazine Edible Twin Cities. I looked over the recipe. Butter, flour, sausage (of course), apple, shredded cheddar cheese. Hmm. I love cheddar cheese, but thought that feta would be tastier. And since the spinach fiasco was over I picked up some crisp leaves at Ballard Market.

The more I thought about the combination, the more I realized I had seen it somewhere else, in specialty sausages. Turkey sausages with apple, or with spinach and feta. I had the backing of butchers, so I knew I was heading down the right track.

The big question though was Tart? or Pie? The original recipe was for a single crust pie. Frankly, with the whole overdose of apple pie I was kind of sick of pies. Why not try to make a tart instead? I like the crunchy ridges that the pan makes on the crust and my tart tins haven't been in heavy rotation lately. It was settled.

So is there any difference between a tart and a pie? Well, the shape-- the most obvious difference-- seems to be the only one. The index in Baking with Julia notes that pie and tart dough are one in the same. The Joy of Cooking also comes to the same conclusion. So is it just the pan? Perhaps. I checked out Wikipedia to find out more. It turns out that a pie is generally considered a baked shell that completely encases a sweet or savory filling. Bottom crust only pies are thought of as tarts or tartlets. And, the fancy sounding tarte tatin? An upside down, single crust fruit tart with a very interesting and much debated history. But, back to the pie and tart quandary. After my Wikipedia search I was left with a burning question: If a tart is only a single crust pie, why do we have tart pans at all? Why not just use a pie pan to make a tart? And what about the free-standing rustic tart? That doesn't need a pan at all! Google-ing was in order because my cookbooks weren't spilling any more secrets.

The results? Tarts are cooked in tart pans (most with a removable ring) so that they can be taken out of the pan easily and displayed nicely on a buffet or table. What a simple explanation. 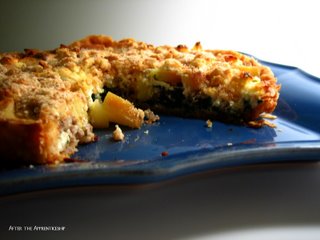 1) With a pastry blender, cut 4 Tbs. chilled butter into flour and salt until coarse crumbs form. Add 1-2 Tbs. of ice water to bring the dough together. Wrap and chill in the fridge for a half-hour. Preheat the oven to 350 degrees. 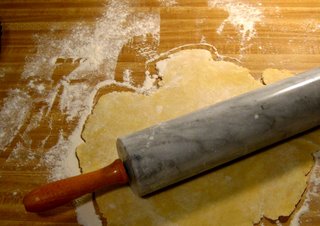 2) When the dough has chilled, roll the pie dough out on a lightly floured surface. Create a circle that is large enough to cover a 9" tart pan. Press the dough into the tart pan and weigh it down with dried beans or pie weights. Trim the excess dough and bake the crust for 20-25 minutes.

3) Remove the sausage from its casing and saute over medium heat, crumbling. Drain the the meat if there is too much grease. Remove the meat from the pan.

4) Heat a separate pan, add the remaining 1 Tbs. butter. Saute the apple until it has just softened. 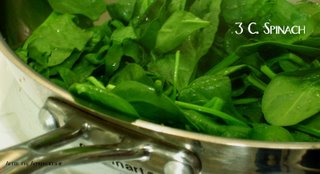 
6) In a bowl, combine the egg and egg yolks, cream, salt, and pepper. Mix together lightly with a fork or whisk.

7) Place the sausage, spinach, and apple in the pre-baked crust. Cover with crumbled feta and pour the egg mixture evenly over the tart. If you want to use bread crumbs, sprinkle them over the tart now. Bake for 45-50 minutes. Before you cut into this dish let it cool for about 5 minutes.