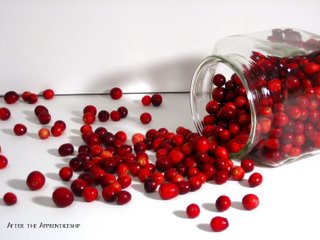 Gourmet. Food & Wine. Cooks Illustrated. Savour. All of the November back issues were flipped open and spread out on the dining room table. A feast for the eyes and imagination -- a glimmer of what was to come on Thanksgiving. But, of course, it was a vision of unattainable perfection.

It was Wednesday, just shy of a week from Thanksgiving, and I was planning the annual feast. My goals were lofty: a completely planned meal and accompanying grocery list by morning's end. However, I had a looming deadline teasing me in the back of my brain. One cranberry apple pie promised to Jenny for her party on Friday and I had yet to make the dough. So this really wasn't the morning to be lingering over coffee and my dreamy magazines.

As I was flipping through Gourmet, something caught my eye. It was a recipe for cranberry ice cream. I was planning on picking up a half-gallon of vanilla to go with the pie at the grocery store, but how good would it be to have homemade ice cream? And the cranberry in the pie would be a perfect match to the sweet creamy confection. I could taste it already....

Now where was I again? Thanksgiving dinner, right. That would have to wait. My ice cream maker was calling to me from the depths, and I mean depths, of my cupboard.

After a lot of finagling with various canning equipment, the cast iron dutch oven, and all of the lids for my pots and pans I found it. The ice cream maker. It needed to be dusted. Actually it was my ice cream making skills that needed to have the cobwebs blown off. But I was sure the ice cream would be ready for its debut with my yet-to-be-made pie. Quite sure.

After re-reading the recipe I realized maybe I had been a bit too sure. This was going to take some work. Cranberry ice cream doesn't come easy. The first challenge? Equipment. I was able to overcome the biggest hurdle, the ice cream maker, by randomly receiving Nana's this summer. If you don't have an ice cream maker I would say that this recipe will be nigh impossible, unless you subscribe to the coffee can method.

The other equipment needed (or highly recommended) that I didn't have? For one, a blender. Secondly? A stand mixer. I called Heather. She is my blender girl and I was desperate.

This is why carefully reading through a recipe is critical. So when the cream and sugar are heating to a very specific temperature on the stove and the cranberries are almost done you don't read the next line of the recipe and see "transfer cranberry mixture to a blender and puree until smooth." Huh? How did I not see that before? Back to the desperate call to Heather.

Heather: "Well I was just going to leave for class, I'm running a little late and it is almost finals week..."
Me: "I'll just come over real quick."
Heather: "Alright..."

Now I could have sucked it up and not used a blender. I could have used the food mill, but I can assure you it wouldn't have been as pretty or as easy as using something electric. And the other major equipment hurdle I mentioned earlier? The stand mixer? That wasn't to be easily remedied by a quick phone call. So I plugged in my hand-held mixer and hoped that the motor wouldn't start on fire.

Equipment aside, the trickiest thing about this recipe, which can be overcome with attention and a sieve, is the fact that eggs, when heated, like to congeal. Sugary scrambled eggs in a sauce pot is no laughing matter, especially when you are expecting a creamy custard.

There are two steps in the recipe that have the potential to turn the egg mixture not into the luscious custard you want but rather into a breakfast dish. The first is step number 3. When you add the hot cream to the eggs, add a little cream at first, then stir. Add a little more cream. Stir. Add the rest of the cream in a steady and self-confident stream. Stir. By doing this, tempering the eggs, you are slowly heating them instead of shocking them with a blast of hot cream. The other step with a high potential of congealed eggs? The second part of step 3. When you heat the eggs and the cream in the saucepan, follow the instructions and don't heat the eggs over 170 degrees (if you don't have a thermometer just don't let the mixture boil). After the second part of step 3 pour the custard through a sieve. Any evidence of congealing that happened in the past two steps will be erased with a quick spin through a fine-mesh sieve.

1) In a medium saucepan, bring cream and 1/2 cup of the sugar to a boil. Stir from time to time to dissolve the sugar. Take off of the heat and cover. 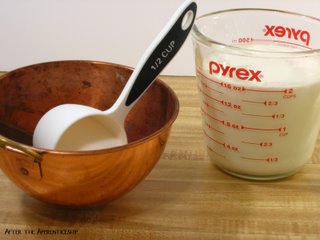 2) With a mixer (preferably a stand mixer) beat together the yolks, salt, and 3 Tbs of sugar. The goal is to triple the volume of the yolk mixture and make sure it is thick enough that it forms "The Ribbon"* that can hold for 2 seconds. This will not take long with a stand mixer. If you have a hand-held mixer I hope that you have a good book to read because this is going to take awhile-about 10 minutes. 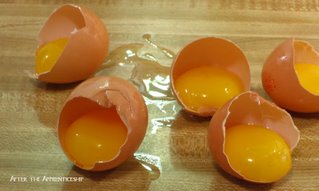 3) Begin mixing at a low speed and begin to slooooooowly pour in the hot cream mixture. Once it has all been added, pour it all back into the saucepan and begin to heat, stirring (I suggest flat-bottomed wooden spoon, but use whatever suits your fancy), until the custard reaches 170 degrees and becomes thickened. Remember, you don't want scrambled eggs. 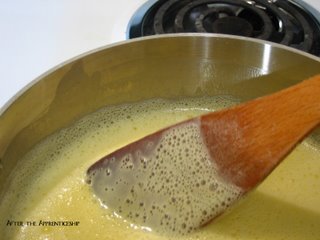 4) Strain the custard through a fine-mesh sieve and let it cool to room temperature.

5) In a heavy saucepan, combine the cranberries and the remaining sugar. Bring the mixture to a boil over medium high heat, stirring. Once it reaches a boil, reduce the heat to low and simmer, covered. Stir occasionally. Simmer until the cranberries burst. 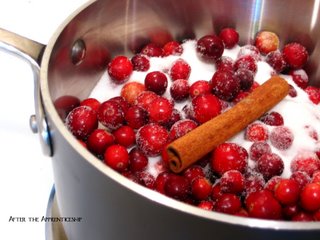 (The original recipe called for a cinnamon stick. I found that I didn't even notice a hint of the spice in the ice cream.)
6)Puree the cranberries in a blender until they are smooth. Press the cranberry mix through a fine sieve. Mix with the custard. Chill the mixture in the fridge. This will take about an hour. 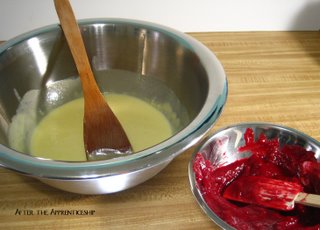 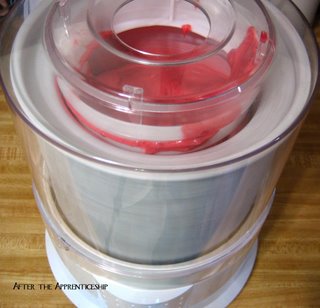 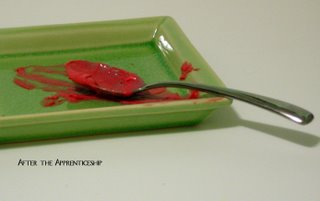 Have you thought about giving this a Swedish flair? I think that Lingonberries would be fabulous in this recipe! Maybe you can dust off the ice cream maker and try it with the lingonberries at Christmas time!