The Aftermath of the Storm, and the Quest for Coffee 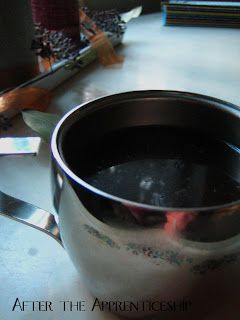 This week's entry has been guest written by Heather Hurley. Thanks Heather! I loved the story and the coffee. Maybe you'd do it again sometime? And, next time I think we should be more prepared with, perhaps, a portable coffee maker?

by Heather Hurley, coffee aficionado
The rest of the country is more than likely unaware (due to the non-coverage of our current Pacific Northwest Crisis) that many areas have been without electricity for going on three days now. The Eastern Suburbs (where Bekah and I live) and the surrounding rural areas were hardest hit when the wind storm of the century whipped through the Pacific Northwest late last Thursday night. I spent most of the night listening to trees cracking open and my windows shaking in the almost futile attempt to block 75-110 mph winds. Just as I was about to doze off to sleep a deathly silence shocked me wide awake. The power went out at exactly 12:52-am.

It's not a big deal to go without electricity for a few hours so I calmed myself down thinking that life would be back to normal by the time I woke up that morning. I was wrong. Day one with no electricity Bekah came to my door around noon wearing 8 layers and bundled up for a Minnesota winter. She sat down grumpily "I can't believe we still don't have power!" Bekah has since interjected this comment into conversation at least once an hour for the last 72 hours. Little did she know at the time that now, on day three, 80% of the over a million people affected by this would still be without electricity- including her. All we could think or talk about was a piping hot cup of coffee, a nice jolt of caffeine to bring us out of our lethargic mood.

I can go without a hot shower for a day, I don't need a lighted mirror to prepare myself for the day and I can even deal with having to wear 12 layers while sitting in a dark room staring at a blank wall...for a day, but any day without coffee is a bad day. 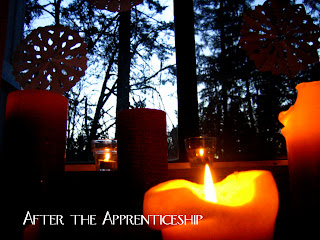 I decided to venture out in search of not the Perfect Cup of Coffee, but ANY cup of coffee. I would go for Perkins coffee as long as it was hot. I had no idea the extent of the damage, block after block and mile after mile I passed non-functioning traffic lights and every single grocery store and retailer was closed (I guess people don't know how to count money without functioning computers). Defeated I turned home with a continuing chant at the front of my mind, "need coffee, need coffee, need coffee."

When I returned home I grabbed my whole coffee beans out of the cupboard and began frantically grinding them with my mortar and pestle. Once the beans where coarsely ground I ran lukewarm tap water through a filter and poured it over the beans into my French press. I let it sit for about 45 minuets before agitating the plunger to bring out as much of the coffee flavor as was possible with lukewarm tap water.

I decided to share the wealth and walked myself over to Bekah's house. Even with the more-than-a-little-bit of grounds remaining (that were spit out into the sink with every sip) coffee has never tasted better (or chunkier).

Today, with the memory of that first day without our precious elixir, Bekah and I made a trek across the lake to the glowing city lights of Seattle, most of which has maintained a constant flow of electricity during this ordeal. We went through a Starbucks drive-thru for, you guessed it, coffee. When I pulled up to the window it was cracked and splintered. The barista informed us that someone had tried to break in during the power outage. I guess that I'm not the only one whose caffeine addiction drove them to desperate ends....." 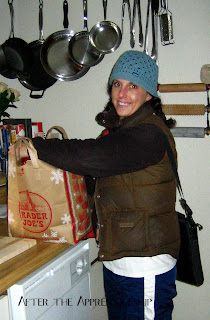 The author saves the day

with supplies as we prepare

for a long cold dark night.